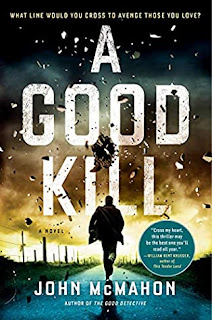 A Good Kill by John McMahon is a very highly recommended outstanding procedural and the perfect conclusion of a three book series featuring P.T. Marsh. This is an intelligent, perfectly crafted series and I very highly recommend reading The Good Detective, The Evil Men Do, and A Good Kill. This whole series is a winning combination!

P.T. Marsh, a police detective in the small Georgia town of Mason Falls, is called by his partner Remy to the scene of a shooting at the Falls Magnet Middle School. One teacher has been shot while another teacher and three students are being held hostage by former journalist Jed Harrington. When Marsh gets into position to remove the threat, he receives a phone call from Governor Toby Monroe encouraging him to shoot Harrington to avoid bad press. Considering this request becomes a moot point when Marsh witnesses Harrington put a gun to the head of the teacher and then turns it toward the students. He chooses to protect the students, but wonders what Harrington's motive was and why Monroe was concerned. As Marsh and Remy look into Harrington, they are called to another murder scene.

In a A Good Kill Marsh investigates three complex crimes and uncovers more evidence and secrets that not only connect to the current cases, but also to the death of his wife and son. This is a riveting un-put-downable procedural. I was glued to the pages and totally immersed in the plot and invested in the outcome. McMahon keeps the investigation discerning, discoveries perceptive, and twists pertinent with no implausible leaps in the plot. The pacing of the novel is absolutely impeccable. It held my attention throughout while allowing the tension and suspense to build to a consummate denouement.

You can read all three books in the series as standalone novels, but the growth of the characters and the richness and complexity of the interconnected story lines work best when all three novels are read. By the time you finish the second novel you will know these characters, be invested in their stories, and care about what happens to them. Apparently McMahon may take a break from the P.T. Marsh series after this third novel. I enjoyed meeting his characters and following the compelling plots enough to allow that the quality of his writing ensures I will follow a new character in a new series. A Good Kill is one of the best procedurals of the year!

Disclosure: My review copy was courtesy of Penguin Random House.
Posted by Lori L at 1:24 PM