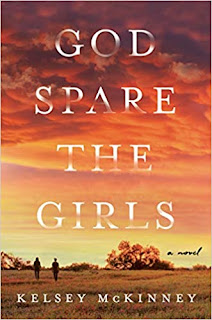 God Spare the Girls by Kelsey McKinney is a very highly recommended family drama and coming-of-age tale about two sisters. This is a sensitive, extremely well-written debut novel that is presented with the emotional depth of a seasoned writer.

Abigail and Caroline (Caro) Nolan are the daughters of Luke Nolan, the head evangelical pastor of a mega church in Hope, Texas, and Ruthie, their mother. Luke Nolan became famous after delivering a sermon on purity that went viral. It was co-written with Abigail, as have most of his sermons, although that fact is unacknowledged. Abigail, however, is the shining example of a perfect daughter. The sisters and their mother have always lived in the shadow of their father and under the scrutiny and expectations of others. The novel opens on the day of Abigail's wedding shower which is held at the house on the ranch the two sisters inherited from their maternal grandmother. Caro, eighteen, is sure Matthew is the wrong man for twenty-four year old Abigail, and is feeling at loose ends. She is leaving for college soon and is questioning everything about her life.

After the shower, Ruthie informs her daughters that she wants to talk to their father alone. Abigail and Matthew take off together and Caro is left at her grandmother's house. Caro calls a young man she's been secretly seeing over to the house and removes the purity ring she has worn for years. Later that evening, after she gets phone reception at the farm, she sees numerous messages. Apparently Luke Nolan has been having an affair and Ruthie has confronted him. He claims it was over a year previously, but now his sin must be brought before the church elders and confessed to the church. Abigail and Caro escape the turmoil and drama created by their father's actions by moving out to the ranch and working out together how they will respond to the betrayal. In the process they uncover some uncomfortable facts about their family dynamics, and make some hard decisions about their future plans, personal faith, and identity.

The main character of the God Spare the Girls is Caro and the novel follows her inner dialogue and emotional turmoil. She and Abigail develop a closer relationship while out on the ranch, isolated, where they are given the time and opportunity to bond and share their true feelings. The two sisters are very different and portrayed as very distinct characters, but the closeness and bond that is present between sisters, even though they have very different personalities, is perfectly captured on the pages. While I longed to talk to Caro and Abigail, to share some insight on faith and family, the sisters do manage to come to decisions about their faith and beliefs for their own lives and develop some inner strength in the process.

God Spare the Girls is very well-written. McKinney captures both the time and place deftly and descriptively. The subtle implications of belief, faith and women's place in the church is handled with sensitivity and a depth of understanding. When Caro discovers more evidence of the affair, which was conducted in the ranch house, it brings a reality to the situation. Betrayal is never a comfortable topic, especially that of a father, but that along with the personal examination and confrontation of their faith and beliefs is depicted with sensitivity and compassion as it effects the daughters of a well-known pastor caught in a scandal.

Disclosure: My review copy was courtesy of HarperCollins.
Posted by Lori L at 3:45 PM