News for the Rich, White, and Blue 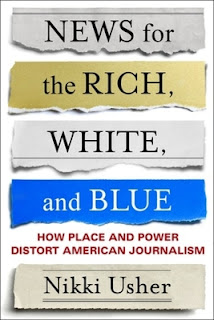 News for the Rich, White, and Blue: How Place and Power Distort American Journalism by Nikki Usher is a recommended, informative examination of journalism from 2016-2019 and the direction newspapers should take. (Highly recommended for for professionals in the industry.)

It is obvious to anyone who was ever devoted to reading their local daily newspaper that journalism and newspapers have changed over the years with the prevalence of the availability of online news. Obviously this switch hit the newspaper industry hard with a loss of income resulting in a reduced staff. Currently, according to Usher's research, the main supporters who are continuing to pay for their daily news are largely rich, white, and liberal. Naturally, the news is written with a slant toward the views of those who are paying for it and keeping the newspapers relevant and in business. Usher states in the opening, "Like many journalists, scholars, industry observers, and policy makers, I was frustrated by the blind spots of national journalists whose media bubble insulated them from the groundswell of right-wing populism in the United States. It became clear to me that place, partisanship, and inequality were increasingly intersecting when it came to how people felt about news and where journalism seemed to be on the decline."

As the journalists serve the readers who will pay for the news, they are increasingly losing touch with the larger scope of diverse public opinions and thus reinforcing the distrust in their coverage. It is a vicious cycle that leads to a continuation of the present state of journalism. Additionally, there is an increasing lack of specifically local and regional news stories as the well-funded media outlets write to cover the viewpoints of a global "placeless" reader.

In part and greatly summarized: Chapter one tackles the reasons behind the change in newspapers. Chapters two and three pinpoint the audience who pays for news, the reasons for journalism's realignment of their focus, and the implications of this. Chapter four looks in-depth at Washington DC correspondents and their role in journalism, as well as the increasing Beltway-Heartland divide in news. Chapters five and six examine how the "place-based dynamics of digital economics shape the future of newspapers at an institutional level" and compares newspapers to the New York Times to show the areas that will shape the future of newspapers. Finally, chapter seven scrutinizes data about supporting newspapers through nonprofit philanthropy and how this support furthers the current charges of news having media bias as the papers are located in liberal cities. Usher concludes with recommendations to overhaul the current practices to increase the ability of journalists to reach a divergent group of readers and cover a varied set of issues.

One recommendation would be to purchase the hardcover edition of News for the Rich, White, and Blue due to the many charts and graphs included in the text and notes covering all the research and data Usher compiled don't translate well to an ebook. Now, while interesting, this scholarly novel can also be repetitive and the information included can be dense. Anyone who has an abiding interest in journalism and the current state of news should read this work and take the conclusions seriously. There may be some additional changes that have happened since the focus of the book since 2020 certainly resulted in many changes.

Disclosure: My review copy was courtesy of Columbia University Press.
Posted by Lori L at 3:15 PM