What to Do When Someone Dies 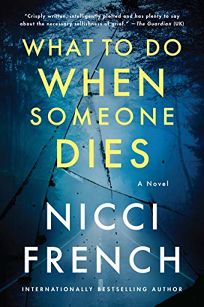 What to Do When Someone Dies by Nicci French is a recommended drama.

Ellie Falkner’s husband Greg Manning has died in a car accident. There was a passenger in the car who also died, Milena Livingstone, a woman Ellie doesn't know. The assumption of everyone is that Greg was having an affair with this woman. Ellie refuses to believe this. In her grief, Ellie sets out on a seemingly obsessive mission to to prove that Greg was not having an affair and discover who Milena was and why she would be with Greg. Ellie is certain that there is something more disturbing behind Greg's death. Even though she has a group of supportive friends trying to care for and encourage her through her grief, Ellie secretly sets off on her own search for more information.

Ellie's thought process as she grieves for Greg and tries to prove he was not being unfaithful is the focus of the plot. It is heartbreaking when she learns of his death and initially tries to deal with the aftermath and all that must be done. Some of the subsequent choices she makes and actions she chooses to undertake are not quite as understandable and the reactions and results of her search do require readers to suspend disbelief. Her search does help increase the suspense and tension, and raises doubts about Greg's death.

There were several times I questioned the reactions of characters in this novel. The first and most glaring was the assumption by seemingly everyone that Greg was having an affair because he had a woman in the car with him. How many people would really jump to this conclusion and then openly share this with Ellie when offering condolences? Perhaps I have a different group of friends, but this would never be something they would openly speculate over, jump to that conclusion, and then share their thoughts. After this point there were several other questionable occurrences, which I won't share due to the fact that they would be spoilers.

Setting aside my question over the character's reactions, What to Do When Someone Dies does create enough tension and suspense to hold your attention and keep you reading to the end. I predicted the ending early on while reading, but I did keep reading. 3.5 rounded down. I was reading a 2021 re-release of the 2008 novel.

Disclosure: My review copy was courtesy of William Morrow.