Tell Me the Truth 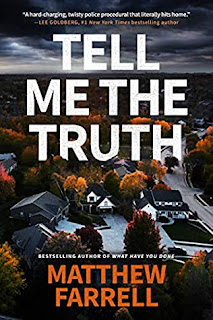 Tell Me the Truth by Matthew Farrell is a highly recommended murder mystery featuring investigators Susan Adler and Liam Dwyer.

Noel Moore returns home at 2 AM from a business trip to find only his 13 year-old son, Charlie, asleep in his bed. When he sees a light out the window in the woods behind the house he goes outside to investigate. What he finds is horrific. His wife, Mindy, is covered with blood, holding a knife, and says their 18 year-old daughter, Jennifer, is dead in the woods. After seeing Jennifer's dead body, stabbed, in the woods, Noel immediately takes charge. He takes Mindy inside, cleans her up, and cleans up the mess. Charlie, woken up by the commotion, witnesses the bloody mess but is told to go back to bed. Finally, at 8 AM Noel calls 911 to report his daughter's murder. Mindy is catatonic and Charlie is instructed to say he was asleep and saw nothing.

New York State Police investigator Susan Adler and consultant partner Liam Dwyer, a forensics specialist, are assigned the case to assist the local authorities. Dwyer immediately feels that something is being left unsaid or information is being hidden by the family. As the crime scene is processed and more information uncovered, the story the family told is increasingly suspect. The family is being protected from further questioning by their high priced attorney, Charlotte Walsh. The whole family is suspect, but there are also several other suspects that have been uncovered along with an increasing number of secrets.

This is the second book with Adler and Dwyer, but it works fine as a standalone novel. Enough of their history and backstory is explained to easily follow their relationship. This is good, because you have a handful of other characters which require closer observation and consideration in this procedural. As the evidence points to falsehoods being told and misdirection happening, almost everyone is a suspect as they are all keeping secrets from each other as well as the investigators. The characters are all believable as they are introduced to the story.

Chapters alternate from the point-of-view of Adler, Dwyer, Noel, and Charlie. and also give a look into the personal life and burgeoning relationship between Adler and Dwyer. Honestly, while I appreciate a glimpse into the personal lives of the investigators, I like my professionals in procedurals to act like professionals and not develop a burning desire for each other, so I could have done without that story line. I will grudgingly admit that it acted as a pause between new suspects emerging and new information being exposed, but that could have been accomplished without the hidden desire. It detracts from the case, which is why I would be reading the novel.

Cudos must be given to Farrell for keeping the plot moving at a steady pace and the intrigue high. The chapters are short which assists in the steady pacing. (Admittedly, I quickly read over the chapters featuring Adler's personal life because they added nothing to the plot.) This is a novel that is hard to predict the outcome because the investigation keeps uncovering new suspects as well as new discoveries. This writing strategy works well as it keeps your interest high and the pages turning. The ending was a surprise for me.


Disclosure: My review copy was courtesy of Thomas & Mercer.
Posted by Lori L at 1:34 PM