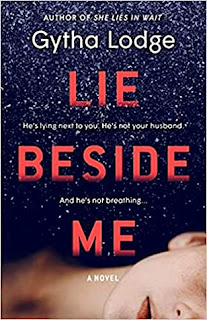 Lie Beside Me by Gytha Lodge is a highly recommended police procedural and the third novel featuring DCI Jonah Sheen.

Louise wakes up with a hangover after a night of drinking with her friend April and instead of finding her husband Niall next to her, she discovers a dead man she does not know in her bed. Drunk Louise is fun Louise, but Drunk Louise also makes bad decisions and poor choices. Drunk Louise first emerged on the day Louise met Niall and her best friend wealthy American April Dumont. Sober Louise moves the body out to her front yard and calls the police. Jonah Sheen and his team, DC Juliette Hanson, DS Domnall O'Malley, and Ben Lightman, are on the case. The man is identified as fitness instructor Alex Plaskett, who is married to Issa Benhawy. Louise is the prime suspect. As they work the case the team also has their own personal issues and problems.

In the narrative between chapters covering the investigation, Louise writes a letter to her husband, which provides the back ground information on their relationships and the problems and struggles they have encountered. As the evenly paced plot unfolds, the case pointedly becomes less straightforward as the investigation uncovers more information, secrets are exposed, and more suspects emerge. At the same time Hansen is being harassed and stalked by a man she was in a relationship with previously.

The writing is quite good. Lie Beside Me is very successful as a procedural since it keeps you guessing about what really happened as the list of suspects increases and more evidence is uncovered. The twists are real as more information is discovered. The less successful part is the rather nonchalant way Louise's drinking problem is reduced to "Drunk Louise" versus "Sober Louise." I found it a rather offhand way to portray someone with a drinking problem.