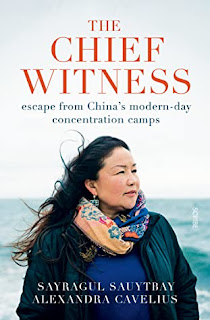 Sayragul Sauytbay shares her life story, her oppression, and her escape from China in this very highly recommended biography. She was trained as a doctor but later retrained as a teacher and was appointed a senior civil servant. She was arrested and sent to a prison based only on her ethnicity. She managed to escape from China into Kazakhstan where she was reunited with her family who had fled there years before. Shockingly, she was then arrested by the secret police in Kazakhstan (with the CCP involved) and put on trial for entering the country illegally. It was during her trial that her courage to speak out over what was happening in China resulted in worldwide attention and support for her. Since Sauytbay shares her whole life story we get to know her childhood, her feelings, and the lifestyle of her family before the CCP and the camps threatened her life. She and her family now live in Sweden but still have the CCP calling and threatening her.

Sauytbay was born a Kazakh in what was called East Turkestan until China annexed the whole region in 1949. Later Mao Zedong renamed it the Autonomous Region of Xinjiang. The area is home to a predominantly Muslim population, chiefly Uighur, but there are also Mongolians, Kyrgyzstanis, and Tartars. The north-western province has also become home to over 1,200 penal camps which are called "reeducation camps" where all these minorities are being incarcerated beaten, raped, tortured, and used as subjects for medical experiments simply based on their ethnic heritage and religion. They are treated as slave labor or bodies to harvest organs from by the CCP. This Chronicles the deliberate extermination of an entire ethnic group. But the CCP ambitions are far beyond this as they have plans to conquer the whole world using the same nefarious strategies. As long as companies and citizens in the free world fail to hold China accountable and continue to value financial interests above human rights, we will be selling our souls to the devil.

Disclosure: My review copy was courtesy of Scribe Publications
.
Posted by Lori L at 1:15 PM