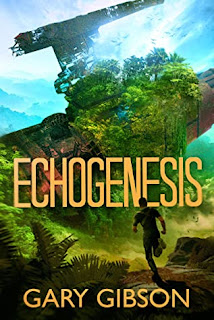 Echogenesis by Gary Gibson is a recommended science fiction novel.

Sam Newman and fourteen others wake up inside pods near a damaged landing craft on an unknown planet. Apparently no one knows why or how they ended up on this planet, in this situation. They are also in new, young bodies, unlike the aging bodies many of them remember. The survivors have also already separated into groups, with those who were military in one and the others, composed of engineers, scientists, etc. in another. Now their overwhelming need is to figure out how to survive.

This is an action-based sci-fi story where you have to set disbelief aside completely and go with what happens, in spite of the improbabilities. There is a decent idea here but the execution wasn't quite as good as the concept. The world building is so-so. There is an interesting variety of characters, but no real character development to increase your engagement in the plot. What this leaves is an entertaining novel with several flaws that you can read quite quickly while trying to find out what happened and why. There are several twists in the action and the final denouement was actually worth slogging through some of the problematic parts of the plot.

Disclosure: My review copy was courtesy of the publisher/author via NetGalley.
Posted by Lori L at 12:19 PM