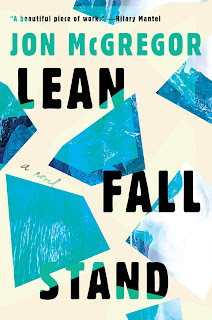 Lean Fall Stand by Jon Mcgregor is a highly recommended novel of an unforeseen accident and the struggle of recovery.

Robert 'Doc' Wright is a 33-year veteran technician at Station K in the Antarctic who arrives there with two postdocs geographic researchers, Thomas and Luke. When Thomas wants to take some pictures they make the disastrous choice to bend the rules, heading out without sat-phones and separate. When a blinding storm quickly rolls in, they are struggling to contact each other. It is at this point that Robert/Doc has a stroke and is unable to walk or communicate. Anna, Robert's wife flies from England down to Chile where he has been hospitalized. Robert, who cannot communicate, is unable to tell anyone what happened. Anna, who is an academic researcher studying climate change, has to set her work aside to become a caregiver.

The narrative is told in three parts: Lean, Fall, and Stand. Lean is the beginning of the novel, at the research station and the accident. Fall and Stand switch to Anna's new overwhelming and thankless role as caregiver to her husband who cannot convey his thoughts or needs. His basic care and therapy takes over Anna's life. Rather than the struggle for survival in the harsh Antarctic, the fight is for survival after a stroke and for caring for a stroke survivor. It is a sad tale that moves incrementally and slowly toward hope.

The choice on presenting some of the story through a stream-of consciousness style captures both Roberts broken language struggles due to the aphasia and Anna's endless tasks required to care for him. There is a lack of strong character development that held back some of the connection that might have otherwise been present for the characters. If you have ever known anyone recovering after a stroke, it might help you engage more completely with the characters.

This is a subdued, delicate novel that portrays the struggles of care and recovery with the same focus as surviving any battle. While I appreciated much of the novel, The lack of real connection with the characters and the repetition of Robert's struggles with his speech held me back a little.

Disclosure: My review copy was courtesy of Catapult.