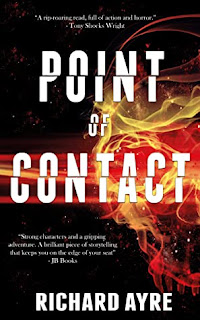 Point of Contact by Richard Ayre is a highly recommended procedural/horror novel.

Ian Fenwick is an ex-fire fighter and fire investigator who is called by Laura Goddard, a detective at the police department in Newcastle, England, to help them with an unusual investigation. There has been a death that defies explanation and appears to be spontaneous human combustion (SHC). Fenwick is asked for his assistance because he has some personal experience with SHC. As other cases occur, what Goddard and Fenwick don't know is that there is a nefarious group behind the SHC cases. A group gathered by a mysterious man known as William is behind the deaths. He listens to otherworldly beings he calls the Visitors and has gathered people who have special abilities to help him eliminate the human race so the Visitors can retake the world.

The narrative follows the current investigation, a teenage girl who escaped from William and is trying to get to Fenwick to warn him about William's plans, and mysterious chapters from William's point-of-view. This helps increase suspense as the novel picks up speed. Point of Contact starts out resembling a police procedural but as the investigation unfolds the novel increasingly becomes a horror novel, as would be expected in most novels where SHC is a major plot point.

Fenwick is a fully realized, sympathetic character and you will be like him and support his efforts. Goddard is his romantic interest, although she is a great character in her own right. The mysterious William and the group of various minions and thugs who follow him are all odious characters. The plot moves quickly and the chapters will speed by as you race to see what will happen next.

Disclosure: My review copy was courtesy of Burning Chair Limited via Netgalley.
Posted by Lori L at 12:42 PM