The Antisocial Network: The GameStop Short Squeeze and the Ragtag Group of Amateur Traders That Brought Wall Street to Its Knees by Ben Mezrich
9/7/21; 304 pages
Grand Central Publishing 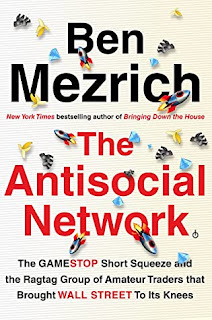 The Antisocial Network by Ben Mezrich is a very highly recommended account of the GameStop short squeeze when a group of amateur investors, gamers, and Internet trolls took on one of the biggest hedge funds on Wall Street. This comprehensive nonfiction book reads like a thriller and is the compelling true story of what happened.

Most people heard about the members of a Reddit group called WallStreetBets, who dubbed themselves "apes," when they started investing in Game Stop stocks in early 2021 and sent the price per share rising sky high which resulted in a short squeeze costing Wall Street hedge funds billions of dollars. Perhaps you also heard "The Tendieman" sea chanty. The Antisocial Network is truly a real life accounting of a David-vs.-Goliath movement. Mezrich starts the narrative back at the beginning, following the story of average people who were members of WallStreetBets, like nurse Kim Campbell, hair salon employee Sara Morales, college student Jeremy Poe, and Keith Gill who livestreamed on a you tube channel called "RoaringKitty." He tells the story of the co-CEOs Vlad Tenev and Baiju Bhatt who started Robinhood, the investing app that was being used by the "apes" because it allowed ordinary people to trade on the stock market without brokerage fees. And he covers Gabe Plotkin of the hedge fund Melvin Capital and Ken Griffin of Citadel Securities, along with others.

Mezrich's does an excellent job presenting what happened. The events leading up to the news breaking story of the Game Stop short squeeze is clearly presented in an understandable manner that is accessible for interested readers. Even though you know what happens, it really is a page-turner. I could follow the technical information about trading and investing, although I was also following the story when it was happening. I thoroughly enjoyed The Antisocial Network from start to finish.

Disclosure: My review copy was courtesy of Grand Central Publishing.