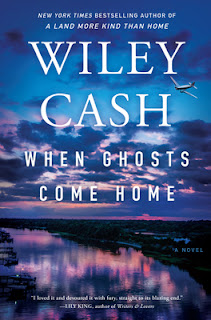 In the middle of the night Sheriff Winston Barnes and his wife Marie are awaken by the sound of a low-flying plane and immediately know something is amiss. Nothing should be landing at the small airport on Oak Island, N.C., so Winston heads over to investigate. What he finds is a large plane has crash landed, the cargo hold is empty, and there is the dead body of a local man on the grass near the landing strip. The dead man, Rodney Bellamy, is the son of a local civil rights activist and math teacher and attended school with Winston's daughter, Colleen. Winston starts the investigation before the FBI steps in and Bradley Frye, the rich-boy developer who is Winston's opponent in the upcoming reelection race in a week, shows up to make his presence known.

To further complicate life, Colleen secretly leaves her husband and comes home to visit her parents. She recently lost their first child at birth and is still grieving. His wife Marie is battling cancer. Frye and his buddies show up flying a confederate flag from their truck to threaten and intimidate Bellamy's widow and Jay, her 14 year-old brother who is staying with her. And rumors are flying around that the plane may have been flown by drug smugglers.

The characters are finely drawn, complex, and realistic in their actions and feelings. The narrative is told through the viewpoints of Winston, Colleen, and Jay. All three are very sympathetic characters who are ordinary people struggling with their own challenging circumstances and have very specific individual thoughts and experiences that closely affect their actions. While the murder investigation involves the plane and who shot Rodney, the real focus is the inner lives and thoughts of these characters. Frye is an anomaly as he is depicted as more of a caricature than a realistic antagonist.

The investigation is almost a side-story to the development of the characters, their inner thoughts, and their interactions with each other and the community. While the plot is compelling, the real pull of this novel is the realistic characters and their personal thoughts and struggles during this particular time period and in their specific circumstances. There is a solution to the mystery, and, although there are holes in the plot, many of the internal struggles of the characters do reach some sort of conclusion. The final denouement is unexpected and shocking.