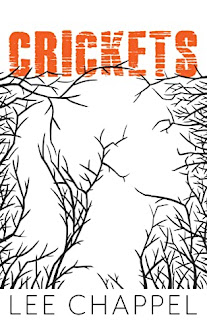 Crickets by Lee Chappel is a highly recommended novel of psychological suspense.

After reporting her rape ten years ago, Kara Peterson left Paige, Ohio, with no plans to ever return. She knew the man who raped her, Dalton Rolenfeld, but, as the son of a prominent family, he was never charged. Kara changed her whole life based on this crime. Now Kara's father, a well liked sheriff, has passed away and she has to return to Paige where everything reminds her of the crime against her. Her neighbor and childhood friend, Brent, is there to assist and support her as he has always been. Once she returns, things start to get odd. Her memories seem off, she loses track of time, and a threatening note is left on her doorstep. It doesn't help that everyone is getting ready to celebrate Dalton's election win.

However, there is now someone who is ready to reopen her case and the investigation. Sam (Samantha) Ellis is a new police officer and the only woman on the force has befriended Kara and is looking into the rape. Sam is there to look at the case and the new evidence and memories. She is concerned that basic police procedures weren't followed in the original case and she is not sure she can trust the locals to take the case seriously. Now that Kara is apparently being threatened again, it is clear that she needs Sam's help.

The narrative is told through the point of view of several characters, mainly Kara, Sam, and a few others in short chapters. Sam is smart and resourceful, going through Kara's case as well as that of her father. It seems that there are plenty of secrets and suspects in this small town and Sam is determined to get to the truth. She is helped by Cody, a local man she can trust, and a friend who is a forensic scientist. The plot moves along at a brisk pace and will hold your complete attention. At first, it is unclear if Kara is losing touch with reality or really being threatened, but as events unfold, it becomes more and more a concern that Kara is being targeted.

Kara, Sam, and Cody are all likable characters. Kara's friend Brent always seems a bit off. The small town of Paige is a character too, as the town spreads gossip and long-held alliances between citizens are still upheld. Everyone shares some clues and context around Kara's attack and who could be currently threatening her. Kara has a difficult time being back in Paige and is overwhelmed and emotional as she meets various people from town. Sam is understanding of Kara's emotional state and sees the clues to something nefarious happening rather than blaming Kara for being overly emotional.

The resolution and the person responsible is not a complete surprise, but reaching the final denouement follows an engaging investigation.


Disclosure: My review copy was courtesy of the publisher/author.
Posted by Lori L at 12:49 PM