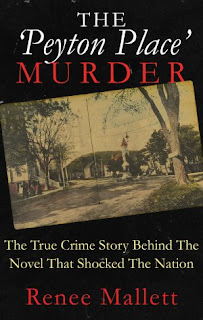 The 'Peyton Place' Murder by Renee Mallett is a highly recommended examination of author Grace Metalious and the murder that influenced her scandalous book Peyton Place.

Renee Mallett delves into the life of Grace Metalious, from her very modest beginnings in Manchester, New Hampshire, to the aftermath of the 1956 publication of her novel Peyton Place. The novel Metalious wrote follows the lives of residents, their secrets, and a shocking murder that occurs in a fictional small New England town she named Peyton Place. When the novel was published it was a huge best-seller, generated a sequel, two movies, and a long-running TV series. The title in and of itself became synonymous with forbidden secrets, sexually charged scandals, and murder. Metalious "became a pariah in the town where she lived, and tabloid fodder for years, ultimately leading to the her untimely death at the age of 39." The murder in her novel was based on a true crime that happened in Gilmanton, New Hampshire, in the late 1940s called "The Sheep Pen Murder." The young woman who was the killer was Barbara Roberts. Although the novel made a few changes in the facts behind the case, Mallett makes a clear connection between the facts of the earlier true crime and Metalious's novel.


This is a well written and presented account of the life of Metalious and the aftermath of her best selling novel. For those of us who read the novel, or saw the movies, or the TV series, the scandal the novel inspired makes sense when examined from the time the novel was written. Today it would not be the shocking novel that it was in 1956. Mallett does an excellent job providing the facts and the harsh judgments that female writers faced during that time period. Metalious is portrayed realistically, as a woman who had flaws but also faced the biases of the times on her own terms. This is a fast, complete, and compelling nonfiction book.
Disclosure: My review copy was courtesy of WildBlue Press via BookSirens.
Posted by Lori L at 1:41 PM