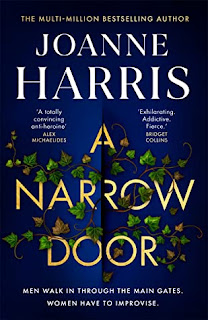 A Narrow Door by Joanne Harris is a highly recommended psychological thriller.

After 500 years times are changing for the Yorkshire's St. Oswald's school. Rebecca (Price) Buckfast is the new and first headmistress and the school is now admitting girls. Even though Rebecca is barely 40, she has worked hard to obtain the position and she is going to prove her worthiness to everyone via her own rules, especially long-time classics teacher Roy Straitley. However, when several of Straitley's former Latin students tell him that they have discovered what might be a body in a muddy sinkhole where new construction is about to begin, he takes the matter to Rebecca.

What follows after this initial discovery is an unfolding tale of Rebecca/Becky's past and the present. The narrative moves back and forth in time following alternating time lines from 1989 and 2006. In 1989 the plot follows Becky's time as a new teacher, her family life, and her memories of her older brother Conrad, who disappeared at age fourteen when Becky was just five. She recounts her story over the length of the novel to Straitley. Her story is alternated with excerpts from Straitley's 2006 diary.

The narrative starts out very slowly which may be off-putting for some readers. Rest assured that if you stick with it you will adjust to the deliberate pacing of the story and the suspense and sense of dread will begin to intensify. Rebecca intimates dark secrets and disturbing events several times, even while causally mentioning her own intractable reactions to some events. Although this is book three of a series, I found no real difficulties in reading it as a stand-alone novel. Rebecca is an interesting character. It will be quite clear that she will tell the truth, as she recalls it, but this won't necessarily always reflect virtuous behavior.

The writing is excellent. The time period of each chapter is clearly marked, so you can follow events between the two timelines and the different characters. The novel is complex, well plotted and, after the slow start, the pacing evens out until it picks up at the end and reveals several new facts. The tension and unease build throughout the novel, making it more compelling as the plot unfolds. The final denouement was very satisfying.

Disclosure: My review copy was courtesy of Pegasus Books.