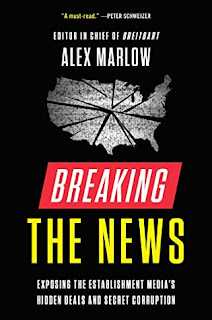 Breaking the News: Exposing the Establishment Media's Hidden Deals and Secret Corruption by Alex Marlow is a very highly recommended examination of the weaponized fake news.

As the Editor-in-Chief of Breitbart News, Marlow is well acquainted with the tactics used by establishment media publications and their content creators who may insist they are neutral, but their reporting reveals obvious agendas and biases that favor the political left. The sheer volume of fake news generated coupled with new censorship tactics by the social media giants, or Masters of the Universe, during 2016-2020 is horrendous and continues on today. Numerous documented examples are given in Breaking the News to highlight the facts as Marlow presents them in a well organized fashion.

Marlo focuses on Bloomberg, CNN, The Washington Post, and The New York Times as well as the tech elite in Silicon Valley. He covers some of the numerous connections that exist between individuals in the journalism and media establishment and the government. They all form an elite group that will say what it wants to and spin stories to serve their agenda or that of their owners. You can clearly see the collusion between them when every content creator (they are not journalists) is repeating the exact same phase across all the mainstream media outlets. Their censorship tactics and strategies clearly emerged as they are telling people what to think rather than reporting the news.

The handling and coverage of the pandemic is also covered. The power these people have taken is overwhelming. It is still absurd that during all the riots, looting, and burning of cities that they wanted to spin it as peaceful. It is a well known and documented fact that social media has suppressed and controlled content and stories that do not follow the agenda the left wants to push. Their censorship and manipulation of the news, especially before the election, is frightening but keep in mind it is still ongoing today.

As Marlow points out, the time to be silent is over. Now is the time to start calling for holding Big Tech accountable for their anti-conservative bias, favoritism toward major corporations, and monopolistic tendencies. It’s time to speak out for your values and your country. The Left do not want compromise, they want compliance. Become one of them or they will come for you. It’s only a matter of time.