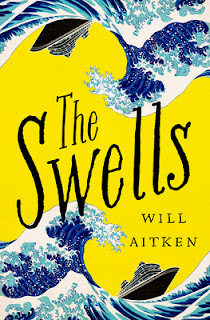 The Swells by Will Aitken is a so-so satirical story of class warfare aboard a luxury cruise ship.

In reality Briony is homeless and makes just enough to survive, but as a travel writer who cruises for free on luxury liners she must mirror the passengers behavior in order to fit in. The Emerald Tranquility is the most luxurious cruise liner and Briony is traveling on it with some of the world's wealthiest people. At the same time the ship's crew lives in small spaces below deck and are over worked and under paid. When a mutiny happens among the crew, it results in the elderly passengers now being required to learn how to mop floors and clean toilets.

This is hardly the "darkly hilarious satire" as described. Although there were a few funny parts, this is not a hilarious novel of class reversal or the privileged versus the underprivileged. All the characters aren't written to resemble real people, they are all caricatures of stereotypes of different people. Let me make this clear, all classes of people are stereotypes. The mutiny happens just before the halfway point (44%). Before that it is a sometimes incomprehensible and decidedly not particularly funny novel of hookups and mocking the elderly rich passengers. After it's all over, the final summary is that this is a satirical novel ridiculing capitalism and promoting socialism. Perhaps those who have taken a cruise will relate to this story much more. Alas, I haven't and have no desire to do so.

Disclosure: My review copy was courtesy of the publisher
Posted by Lori L at 3:06 PM