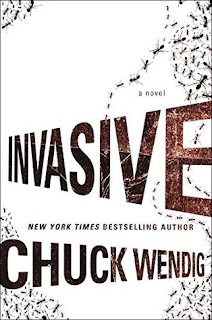 Hannah Stander is a futurist and consultant for the FBI who assists with cases that feature advanced technological and scientific advances. She identifies unseen threats, whatever they are, and determines the cause. When FBI Agent Hollis Copper has to investigate a dead body with no skin surrounded by the bodies of over a thousand ants found in a cabin in rural New York he calls Hannah in to assist with the case. The investigations leads Hannah to visit entomologist Ez Choi, who determines that the ants were engineered, and have genetic markers from the biotech lab run by biotech billionaire Einar Geirsson. Hannah is invited by Einar to visit the island lab off the coast of Hawaii.

The plot is fast paced, science -based, and suspenseful. It will grab your attention from the start, especially if you like Michael Crichton's novels, and not let go until you have finished. The threat looms large in the plot and Wendig makes sure you will feel all of it. He thoughtfully provides the word for one of these sensations, formication, which is the feeling of insects crawling across or under your skin. This sensation will haunt you, as it does Hannah, throughout the novel. Still, Hannah is a tough, intelligent, determined, and complex protagonist. Raised by parents who were survivalists, she uses the skills (and the distrust she was taught) to her advantage as she interprets the information and the people she meets during the investigation.

Because Invasive is a science fiction thriller, I can set aside disbelief easily, however there were two things that bothered me. I did greatly doubt Hannah would be stupid enough to sleep with Einar, part of the group she is investigating. Also, since I was reading this several years after it was published, I noticed several political statements that dated the novel. This was a perfect example of why you leave the opinions out so the novel has more longevity and because we can't all be futurists. These are trivial though in comparison to the enjoyment found in reading Invasive.