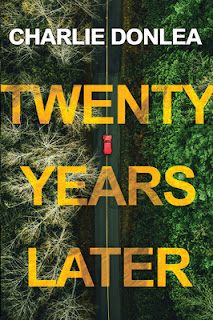 In 2001 author Cameron Young was murdered. His body was found naked displaying obvious whip marks hanging from a window at his house in the Catskills. New investigator Walt Jenkins handled the sordid case where the circumstantial evidence pointed toward Young's lover, Victoria Ford. Ford never faced prosecution, though, because she died when the twin towers went down so the case was closed. Now in 2021, the New York medical examiner’s office has successfully identified the DNA of a bone fragment as that of Victoria Young.

Avery Mason is the host of the TV show American Events and she knows a good story idea when she hears it. When she learns about the identification of Ford's DNA and the murder she was accused of, Avery is determined to investigate the current identification and the case from 2001. Avery talks to Ford's sister, who wants to prove the innocence of her sister based on a final phone call she received on 9/11 from her and she is sure Avery can help her do this. Avery embraces this challenge, but she has secrets from her own past and another goal she wants to achieve.

Complicating matters is Walt Jenkins. After the Victoria Ford case, he was recruited by the FBI. Now retired due to an injury, he has been living a solitary life in Jamaica. Now the FBI wants him back to help Avery in her investigation, but to also keep track of her based on family secrets she is hiding. There are so many secrets everyone is keeping and everyone is moving the puzzle pieces around based on their needs and thoughts.

There are a plethora of characters appearing throughout the novel, but they are introduced seamlessly and logically in the story and are easily kept track of as memorable individuals. Both Avery and Walt are flawed, sympathetic, and likable characters even while they are holding secrets from each other. All the characters are unique individuals and ultimately fit seamlessly into the story. Certainly they aren't all well-developed characters, but the pacing and twists make up for this.

Twenty Years Later is a very compelling, complicated, and well written mystery that is very entertaining. As you are reading you know there is so much more to know that hasn't been revealed yet and this quest to learn the whole story makes the novel irresistible. New revelations appear frequently as more information is uncovered, back stories are disclosed, and secrets are shared with other characters. There are a few of the plot points that I found implausible but they serve the job to propel the narrative forward. The final big twists were surprising, entertaining, very satisfying, and made up for any questions I had about the earlier plot.