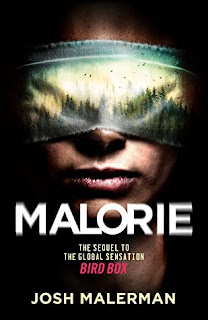 Malorie by Josh Malerman is a very highly recommended sequel to Bird Box (2014).

Malorie and her children had to flee the school of the blind after living there for 2 years. It is now 10 years later and Tom and Olympia are 16 years-old. The three still live blind folded to avoid even a glimpse of the creatures that will result in madness and violence. The three have made an isolated camp in the woods their home and follow procedures set by Malorie for their safety. When a stranger shows up claiming to be a census working trying to document survivors, Malorie insists he leave, which he does but he also leaves behind a stack of papers that may change their lives. The information they read sends them on a trip away from safety and out into the world again.

Bird Box is a classic novel of suspense and horror. Any sequel is following it would have a tough act to follow. Malorie manages to do this and in an exceptional way. Malorie seems a bit more brittle and strident now, but It has been 10 years. Think about that. It has been 10 years of living blindfolded and in a constant state of fear and vigilance while always trying to protect her children. She has seen and heard the results of seeing the creatures. With good reason she does not trust people. What she does in this novel is leave behind a place where she has kept her children safe for years and sets out on another journey. She is allowing herself a sliver of hope and that in itself is amazing.

In Malorie we meet Tom and Olympia as teenagers and are given indications of the adults they will become. They are more developed as characters. Tom is clashing more and more with Malorie, as any teenager would, even in the harshest of survival circumstances. They both have secrets they are keeping.

The writing is excellent and Malerman does not waste a word while telling it. The pacing is fast, which is good because the tension will be high throughout the book until the very end. These are people fighting for their survival and their lives while blindfolded. It is also a story of teens coming into their own as they approach adulthood. There are a few heart stopping moments and surprises.