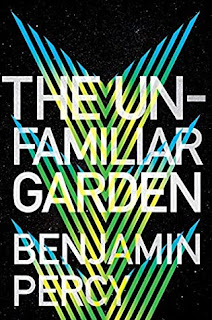 The Unfamiliar Garden by Benjamin Percy is a highly recommended science fiction horror novel featuring fungus and is the second book in the Comet Cycle series.

The night of the meteor storm Jack and Nora Abernathy’s daughter Mia vanished in the woods. The couple's marriage broke up and they tried to live in the changed world, Nora as a police detective and Jack as a mycologist. Five years pass and the rains finally return to the Seattle area, which means plant life begins to return and flourish. While Nora investigates several horrific murders, Jack finds evidence of a new parasitic fungus. In an unimaginable series of events, a connection between the murders and the parasitic fungus appears, which results in Jack and Nora working together.

The character development of Nora and Jack is basic while the rest of the characters are depicted more as caricatures of a type of person rather than as realistic individuals, but in-depth development is not necessary here since the focus is going to be directed in other nightmarish areas. The Unfamiliar Garden is short enough that you can read it in one sitting. The actions starts right away, the suspense and fear build quickly, and everything works seamlessly together while moving at a fast pace right to the end.

This is an enjoyable, scary novel that will stretch the imagination while providing thrills and chills. It is not necessary to read the first book in the series, The Ninth Metal. I haven't read it and followed the plot easily. As I was reading I kept thinking the novel felt too familiar, as if I had read it before, but then I suddenly came to the realization that in The Unfamiliar Garden Percy adds to the world of fungus fiction. A few examples in the fungus fiction genre include: Day of the Triffids by John Wyndham; City of Saints and Madmen, Shriek, Finch, and Annihilation by Jeff Vandermeer; Semiosis and Interference by Sue Burke; The Genius Plague by David Walton; Amatka by Karin Tidbeck.