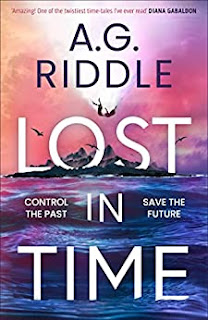 Lost In Time by A G Riddle is a highly recommended science fiction time traveling thriller.

Dr. Sam Anderson and his daughter Adeline have been arrested and  charged with killing Nora Thomas, a colleague and lover. Sam and Nora were on the team that created Absolom, the time traveling device that used to send dangerous criminals to the prehistoric past. Even though he is innocent, Sam admits guilt based on a note left for his to find. His admission will send him back in time to the Triassic period. Adeline then devotes herself to uncovering the truth, which ends up involving much more than she anticipated.

Sure, you have to add in a heaping dose of setting disbelief aside, but after that, Lost In Time is sheer entertainment and a compelling and interesting time traveling mystery. Yes, dinosaurs are a part of the plot, but in actuality only a small, very gripping part. Although, admittedly, I would have enjoyed more of Sam in the Triassic Period. There is enough to satisfy time traveling fans, while still propelling the plot forward. The bulk of the novel is concerned with Adeline finding out the truth about Nora's murder, prove her father's innocence, and, well, everything involving the development of the Absolom project.

All of the characters are well written. They are complex, sympathetic, and fully realized. Even as each problem the individual team members are dealing with is expose, you will feel support and sympathy for them.

There are plenty of technical details provided, however, you don't necessarily need to follow all of them in order to appreciate and enjoy the plot. Once the narrative alternates between Sam trying to avoid dinosaurs and Adeline trying to uncover the truth, most readers will be hooked until Riddle reaches the end.

Disclosure: My review copy was courtesy of Head of Zeus via Edelweiss.
Posted by Lori L at 2:03 AM