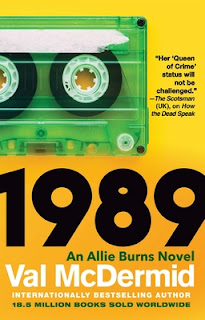 Allie Burns is running the northern news operation of the Sunday Globe, but she is till an investigative reporter at heart. While covering the memorial service for Lockerbie Pan Am bombing victims, she receives a lead over another story about HIV/AIDS patients and pharmaceutical companies. This is just the start as Allie covers 1989, an unsettling year that I wasn't sure I wanted to return to, but following Allie through the events was interesting. The plot mainly focuses on the Aids/HIV crisis, but also sends Allie to East Germany, covers Gorbachev, perestroika to the Berlin Wall coming down and numerous events in-between.

Allie and her girlfriend, Rona, are both fully realized characters who work well together in the narrative and help add depth to the plot. There are little details included in the plot that will take readers who remember back in time while the narrative also covers the bigger, news worthy topics from the time. There are plenty of little pop culture references included in the plot. The writing is excellent, as expected, but the novel did feel a little overly long and slow-moving. Perhaps covering so many well researched events from one year was a bit too much, but 1999 will be an interesting third novel to this series that started with 1979.

Disclosure: My review copy was courtesy of Grove/Atlantic via NetGalley.
Posted by Lori L at 12:50 AM