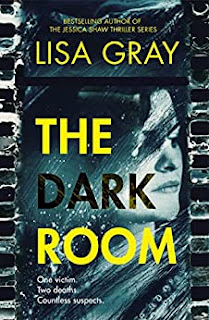 The Dark Room by Lisa Gray is a highly recommended thriller full of lies and betrayal.

Leonard Blaylock was a crime reporter before he cheated on his fiancée, Caroline Cooper, which ended very badly for his relationship and career. Now he freelances and spends most of his days buying and developing mystery film, the forgotten and discarded rolls of film of strangers. When he develops one roll, he finds pictures of a murdered woman. Leonard recognizes the woman as "Red," a woman he had a one-night stand with five years earlier, the night he thought she died, the night Leonard lost his fiancée and career. If she didn't die five years ago, then what really happened and who was she.

Leonard is an unappealing character, however readers will be sympathetic to his current situation, when he realizes he was deceived five years earlier and it was certainly a planned event. But it is also clear he was using drugs, cheating on his fiancée, and fled the scene when he thought Red had died. He contacts Martha Weaver, a woman he knows who is also into mystery film. The two begin to work together to try and figure out what happened five years ago,

The plot unfolds through the point-of-view of several different characters, and also moves in different timelines. This allows tension to build because you don't know exactly what happened and who did what. Leonard may have been behaving badly five years earlier, but he wasn't the only on harboring secrets and schemes. Oh, the darkness that hides in the human heart. There are multiple suspects and duplicity is prevalent at every turn. With the disclosure of new information uncovered during the investigations by Leonard and Martha, the narrative includes plenty of twists and surprises.

The story line moves forward at a steady pace as the new clues and information are revealed. At times you will have to suspend some disbelief, but this is an entertaining thriller. 3.5 rounded up.

Disclosure: My review copy was courtesy of Thomas & Mercer via NetGalley.
Posted by Lori L at 2:27 PM