The Boys from Biloxi 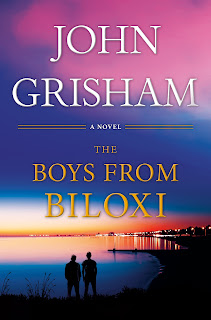 The Boys from Biloxi by John Grisham is a very highly recommended legal thriller and the story of two families.

Biloxi, Mississippi, is known for its beaches, resorts and seafood industry, but it is also know for gambling, liquor, and prostitution which is run by a small group with tacit approval by the local police. Keith Rudy and Hugh Malco, two sons from Croatian immigrant families grow up as friends in Biloxi in the 1960s, head in different directions as teens, and find themselves on opposites sides of the law as adults. Hugh’s father, Lance, became the “Boss” of Biloxi’s criminal underground. Keith's father Jesse, became a lawyer determined to take down the illegal establishments plaguing Biloxi.

The narrative of The Boys from Biloxi is the kind of intricately plotted and detail oriented story that will grab you and pull you into the lives of these fully realized characters. Rather than a story with lots of twists and surprises, this is a legal thriller, but more essentially it is a family drama spanning generations and decades while covering the history of Biloxi and the fictional families involved in this saga. The enjoyment is the details of the story, who does what over the decades, the choices the characters make as well as the consequences of these choices. The novel starts out at an even pace before it takes off and picks up speed.

The writing is excellent in all areas: the quality of the writing, the complexity of the plot, the establishing of the setting, the development of the characters, the corruption, and the courtroom scenes. Everything on the pages springs to life under Grisham's hands and these characters and the story become real. It should be mentioned that the novel is populated with male characters, with females taking a secondary role, but it works as the focus of the novel is on fathers and sons as well as the male dominated social circle that dominated the area.

I loved this long family saga that is rich in details and atmosphere while creating a tense and compelling drama.

Disclosure: My review copy was courtesy of Knopf Doubleday via NetGalley.
Posted by Lori L at 1:37 AM