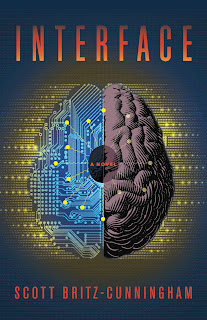 In the future the governments around the world require everyone at age 14 to be linked by a brain implant called the Interface. It replaces cell phones and computers and has become something everyone depends upon for everyday life. All the information you need is immediately available and you can connect to anyone at any time. It is also illegal to not have the Interface, upon penalty of death.

Taikai Graf invented the Interface and has been presumed dead for years. His half-brother Egon is head of the USA's FATA, Federal Anti-Terrorist Authority, and he wields his power as a draconian threat. NYPD captain Yara Avril was married to Egon, but loved Taikai. Yara starts investigating a case of a man that has went on a bizarre rampage, when Egon and the FATA inexplicably take it over. It becomes clear that much more is going on and Yara fights to continue her own investigation which leads her to question the presumed death of Taikai and the wisdom of the implants.

Brain implants are an interesting premise for a novel, but the real focus is the investigation into where Taikai is and why he is taking his current course of action. There are a few scenes, however, that could have easily been edited out to keep the focus on the actual plot but these can easily be skipped over. The medical information provided to back up the Interface is realistic due to the author's background, but the actual plot requires some suspension of disbelief.

The writing is to the point and the plot, the investigation, is compelling. The characters aren't fully realized, but the real reason to read the novel is to find out why Taikai is on his present course of action, what is his end game, and, ultimately, to consider our current addiction to always being plugged in and what this could mean in our near future.

Disclosure: My review copy was courtesy of Keylight Books via Edelweiss.
Posted by Lori L at 11:49 AM