The Face of the Waters 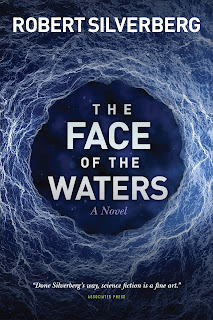 The Face of the Waters by Robert Silverberg  is a highly recommended re-release of the classic science fiction novel originally published 10/1/91.

After the destruction of Earth, a surviving groups of humans are living are living on other planets. Hydros is a world covered in oceans and has a few artificial islands. When a human commits an offense against a group of  intelligent aquatic mammals, the human population of the island Sorve are forced into exile. The group is on six ships and they are searching for new home while navigating oceans full of hostile intelligent creatures as well as bad weather.

Silverberg excels at creating worlds and this gift is in full display here. The world building is what makes The Face of the Waters worth reading and I'm sure it is why it is being re-released. The intelligent creatures he imagines and populate Hydro with is incredible, as are the artificial islands humans populate.

The epic is told through the point-of-view of Valben Lawler, the doctor, who is addicted to drugs trying to treat his own problems, but he is a moral character.  Delegard, who is disagreeable as a character still portrays some redeeming human characteristics.  The Face of the Waters clearly explores what it means to be human and in a community in contrast to what it is to be alien.

There are several plot elements that date the novel to be clearly written in 1991. There is a mystery embedded in the novel and the ending is satisfying, but, as a fan, Silverberg has written better. 3.5rounded up

Disclosure: My review copy was courtesy of Three Rooms Press.
Posted by Lori L at 12:49 AM