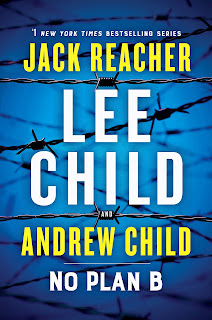 No Plan B by Lee Child, Andrew Child is a highly recommended action thriller and the 27th novel in the Jack Reacher series.

Jack Reacher is passing through Gerrardsville, Colorado, when he sees a man stealthily push a woman under the wheels of a moving bus. He is the only witness who saw the complete view of the murder and the killer taking the woman's purse. The death is ruled a suicide, but, Reacher, being who he his, chased the killer down and now he is a target. When urge to not get involved, he doesn't care. He is going to find out why the woman was murdered and who is responsible. The problem is that those responsible don't truly understand the talents of Reacher and think any threat he poses can easily be eliminated.

Adding to the main story line which follows Reacher's quest for justice, there are two other subplots. In one, a 15-year-old boy runs away from his foster home in L.A. after learning from his dying birth mother the identity of his father. The second one is a father, who is also an arsonist, is seeking vengeance for his son’s death.

This thriller moves along at a rapid pace, with plenty of complications and twists along the way. Readers of the series know there will be violence as Reacher dispenses justice and stops the bad guys. Reacher should be a known character by this time, along with his physique, background, and determination to right wrongs and bring justice to whatever situation he encounters. You might have to suspend disbelief, but No Plan B, the latest addition to the series, will be read for the action movie plot, clever fight scenes, and escapism.

Disclosure: My review copy was courtesy of Random House via NetGalley.
Posted by Lori L at 6:24 PM