A Strange Habit of Mind 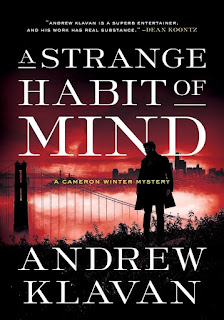 A Strange Habit of Mind by Andrew Klavan is a very highly recommended thriller and the second book in the Cameron Winter series. I loved this second book even more than the first and am looking forward to more novels featuring Cameron Winter in the future.

A young man, Adam Kemp, texts someone he trusts with two words, "Help me," and then jumps off a building. The man he trusted is Cameron Winter, currently an English professor who was once a spy with a secret government agency called the Division. Winter tries to contact Kemp unsuccessfully, and then looks into what happened. After talking to the detective who investigated the case, Winter has a few more questions about the reason for Kemp's final decision. Winter begins to look into Kemp's life and after talking to Kemp's girlfriend, he begins to suspect her brother-in-law, Big Tech billionaire Gerald Byrne may have had a hand in Kemp's death, as well as the death of others.

Winter is a wonderfully unique and fully realized character. He has what he calls "a strange habit of mind." He is able to look at a situation from all angles and reach a clear understanding of what actually happened. He is also haunted by his past, questions the idea of spiritual faith, and struggles with a guilty conscious over what he has done. Excerpts from Winter's therapy sessions where he talks about his background and his guilt are included between chapters with more action. These help to create a picture of who Winter is and what he is struggling with.

Once I started reading, I was totally engrossed in the story from start to finish. The mysteries that need to be solved, the suspense created as the danger rises, and the analytical problems that must be handled within the thriller made the action and the characters memorable. Winter may know what his "strange habit of mind" is telling him, but it is sheer pleasure in following along, putting the clues together, and figuring out what he knew long before the reader.

The writing is absolutely excellent, as one would expect from a seasoned, experienced two time Edgar winner. Klavan has provided an exceptional second novel for the series. As a strong, independent, modern woman I loved this novel and am looking forward to another installment in the series. A Strange Habit of Mind was a pleasure to read.

Disclosure: My review copy was courtesy of Mysterious Press via NetGalley.
Posted by Lori L at 8:01 PM