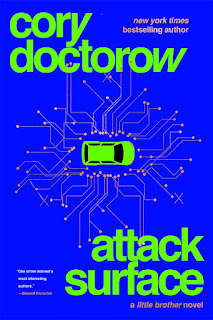 Attack Surface by Cory Doctorow is a highly recommended tech thriller set in an alternate universe.

Masha Maximow is a counterterrorism programmer for an international cybersecurity firm. She programmed the hacks that allowed countries to spy on their citizens. She thought she was on the correct side but... She also sometimes for her own reasons uses her skill set to help the dissidents evade detection and tracking. When the targets of government tracking are citizens in a foreign country, Masha could easily compartmentalize how she was assisting the violent actions against citizens, but when the same technology is used against her friends, Masha is suddenly faced with a dilemma and must choose a side when no choice is without consequences.

The narrative follows Masha alternates between her present day relationship to a radical group in San Francisco and her past working for Xoth and Zyz. We can follow what she did in her job and how that translates into the real world and impinges on real life citizens of other countries and in her home. Masha's job helping spy on people and keeping track of their every move and their every contact and interaction with other extracts a steep toll.

Attack Surface is the third book in a series, following Little Brother and Homeland, but it can be read as a standalone novel set in the alternate universe created in these novels because Doctorow introduces new characters in this novel. The characters grapple with the integrity of using technology and surveillance to spy on and detain citizens based on their actions and beliefs. Those who followed the Edward Snowden controversy will appreciate the questions raised in this novel, a science fiction novel that is surely fact based. This is a technology heavy thriller, very technology heavy. I followed along only because I often have discussions involving many of the issues here with a programmer. (But I will admit to occasionally skimming some tech-heavy parts while following the action.) The heavy cybertech terminology and the tech-heavy vocabulary may lose some readers along the way as they lose track of the plot due to the vocabulary.

If you can overcome or understand the tech-vocabulary, the story is very captivating and extremely frightening. What will keep the pages turning in this compelling novel is the fact that this is fiction, but could easily become fact. It is a warning, of a sort, and Doctorow makes clear in his afterward what he thinks we should be concerned about and why. (I'm not overly crazy about authors preaching to me about what they think "I" should think, but I do like to keep informed and research information about everything. If an author points out information, I will take on researching it on my own, thank you.)

Disclosure: My review copy was courtesy of Tor/Forge .
Posted by Lori L at 4:32 PM