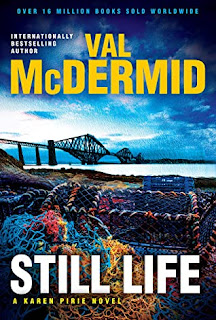 Still Life by Val McDermid is a highly recommended police procedural and the sixth novel in the Karen Pirie series.

A body with the skull was bashed in is discovered in Scotland’s Firth of Forth and the investigation identifies the body as James Auld, who left the country ten years earlier when he became a suspect in the disappearance of his older brother. The tie to the previous cold case means that  Detective Chief Inspector Karen Pirie of the Historic Cases Unit is called in to investigate. Constable Jason Murray is left to continue the investigation the two were working on, skeletal remains found in a van parked in a Perth garage, and he promises frequent updates to Pirie. Pirie is assigned DS Daisy Mortimer to assist her.

This is a complicated novel following several investigations and narrative threads, which makes it a perfect read for those who enjoy procedurals and like to follow intricate investigations. These two cases are both perplexing and there is much more going on than meets the eye. To make matters even more emotional and troublesome, Pirie is have some relationship issues with her new boyfriend, Hamish Mackenzie, and the man responsible for the death of the love of her life is being released from prison.

McDermid will keep readers entertained throughout this procedural. The pace does seem a bit leisurely at times, but there is so much going on that the extended progress allows you to absorb what has been uncovered in all the areas of inquiry. Some aspects of the plot are more predictable than others, but the denouement cleverly wraps up all the story lines. With skill and competence McDermit keeps all the investigations running smoothly and follows the inquiries with equal interest.

Karen Pirie is an intelligent, intuitive character with flaws, but it is always a pleasure to follow her along in the investigation. It is great to see Murray on the investigation and I'm hoping Daisy Mortimer is added to the team in the Historic Cases Unit. Readers new to the series will still be able to appreciate it without reading any of the previous Pirie novels, although the previous novels will give you much more background information - and are just as complicated and engrossing.

Disclosure: My review copy was courtesy of Grove/Atlantic.