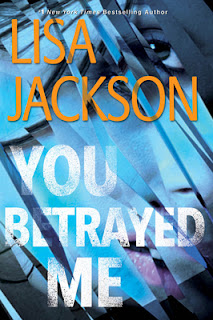 You Betrayed Me by Lisa Jackson is a highly recommended novel of suspense and the third book featuring a member of the Cahill family.

In the opening a woman has been tazed and left as a prisoner in a tiny house locked from the outside. James Cahill, an heir to the Cahill fortune, awakens in the hospital in Washington State. He's had a concussion and is bruised and beaten with obvious fingernail scratches down his cheek. He's in pain, medicated, and has no recollection of what happened that caused his hospitalization. He does have a vague recollection of his girlfriend, Megan Travers, and some argument. He learns that Megan has gone missing and he was the last person to see her. When a blond sneaks in to visit him, he doesn't recognize her at first. Then it comes to him that she is Sophia Russo, the woman he has been cheating with. Police are looking into his injuries while trying to find Megan. As their investigation continues and the media follows it, it is clear to everyone that James has a provable reputation as a serial Lothario. Then Megan's sister, Rebecca, shows up, trying to find clues to his sister's whereabouts. She was previously yet another girlfriend of James.

As mentioned, none of the characters are likeable or sympathetic. They are well-developed characters, but It's hard to feel a whole lot of compassion for James, a serial philanderer who has a hard time thinking with his brain. The woman are just as bad, but they are mostly a bunch of opportunists looking at the wealth James will inherit someday. Other characters include Detective Rivers, who has a sort of sixth sense he keeps quiet about, a journalist sure that this story will make her mark, an odd girl secretly spying on James and Sophia, and various towns people.

The writing is very good in this psychological thriller and the suspense created is what will keep you glued to the pages as you try to figure out exactly what is happening. Jackson keeps specifics to herself while slowly allowing more details to come out in the story, but pay careful attention to what she doesn't say and don't let implied facts slip you up. I'm giving this advice, but I got carried away with the story and didn't follow it. I played right into Jackson's hand and was surprised several times with the turns the story took.