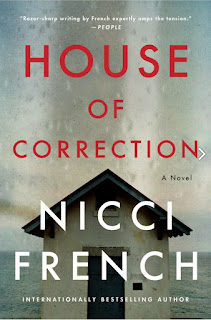 House of Correction by Nicci French is a highly recommended legal thriller/drama.

Tabitha Hardy is accused of murder but she didn't do it - or did she? The body of her neighbor Stuart Rees was found fatally stabbed and wrapped up in a plastic sheet in her shed in Okeham, England. She is accused of the murder and is remanded to prison to await her trial. Years earlier, when she was fifteen, Rees was her secondary math teacher and sexually abused her. At that time she told no one, but she has suffered from the consequences of it ever since. Tabitha has been in a doctor's care and medicated as she suffers from debilitating depression. The day of the murder Tabitha was having a bad day and she really can't remember many events from the day.

When her court appointed counsel recommends Tabitha accept a plea, she fires her and sets out to represent herself in court. She doesn't understand how it works, but she is determined to wade through the evidence and discover what really happened that day, a day that she really can't remember. As the trial nears Tabitha has no real strategy, but she does have a timeline of what happened in the village that day and is determined to not let anyone railroad her.

Tabitha is a well developed-character, which has pros and cons in the narrative. Her rather prickly and combative personality combined with her depression can make her dislikeable over the course of 500 plus pages. That she is also a tenacious character who is determined to cast doubt over her guilt makes her awkwardly appealing when she takes on the prosecutors and the judge. She is totally stressed out but she is also astute and clever enough to catch problems and inconsistencies in the case against her.

The start of House of Correction is slow at the start so readers need to be encouraged to continue with it as it will become more interesting and the pace will pick up. British husband-and-wife writing team of Nicci Gerrard and Sean French, writing as Nicci French, do an admirable job with this novel, which starts out as a prison drama, morphs into a procedural, and then becomes a legal thriller. It all is done so smoothly you wont give it a second thought until you have dropped your mouth open over the twist and finished the novel. After that, you will likely be impressed with what they accomplished in this novel.