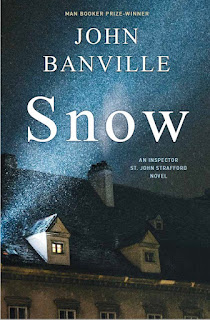 Snow by John Banville is a highly recommended procedural and the start of a new series.

Set in 1957 Ireland a priest has been found murdered at the home of an aristocratic Protestant family. Detective Inspector St. John Strafford has been summoned to County Wexford to investigate the murder of a house guest, Father Tom Lawless, at Ballyglass House, the home of Colonel Osborne and family. Strafford is also Protestant and is determined to conduct his investigation and find the truth behind the murder in spite of the firm control the Catholic Church has over the narrative of the whole process. The Church declares the death an accident. Other obstructions facing Stafford include the reticent culture of the community and the accumulating snowfall. As he carefully looks into the Osbornes, he learns that they are not quite as they present themselves.

While the plot in this procedural carries no surprises, the appreciation is found in the prose, the period setting, and the character development. The quality of the writing sets this novel above the predictable plot. Banville excels at descriptions and focuses sharply on depicting Ireland in the 1950's and the culture of the land at that time. While following the investigation and Strafford's inquiries, the descriptions and observations shared in the writing are simply amazing. The excellence continues in the descriptions of the characters and Strafford's perceptions and observations of them. This is a beautifully written, atmospheric, detailed novel, albeit with a predictable plot.

Disclosure: My review copy was courtesy of Hanover Square Press