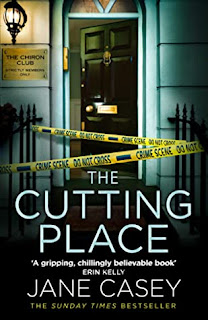 The Cutting Place by Jane Casey is a very highly recommended procedural and the ninth book in the Maeve Kerrigan series.

When a severed human hand is found by a mudlarker by the Thames River in London, DS Maeve Kerrigan and her partner DI Josh Derwent are called out and looking at the area where the hand was found as well as the subsequent other various small parts of a body. The team is lucky when a DNA match is found. The dead woman was identified as 28 year old Paige Hargreaves, a freelance journalist. Now the investigative story Paige was working on may provide clues to what happened to her and why. It seems that Paige was secretly looking into something that was happening at the Chiron Club, an exclusive, elite men's club run by Sir Marcus Gley. This club is not only private, but is comprised of only wealthy, privileged, powerful men. Members include heads of companies, politicians, and legal dignitaries. Investigating the club and determining what Paige discovered involves a labyrinth of clues and secrets.

There is a secondary storyline that takes place two years earlier. It follows a wild party out at a country house and a young man wakes up after a wild, uncontrolled night of partying, to find evidence that he is in a world of trouble. A third narrative thread follows a secret Kerrigan is keep from everyone, including Derwent. He already doesn't like or trust her boyfriend Seth, but Kerrigan is defending Seth's actions and his every misstep. She refuses to see the darkness behind his actions as he tries to control her every move. Adding to the complexities is another surprising revelation that comes to light.

Obviously, this is a complicated plot that follows several different, complex narrative threads, but it is also a compelling, tension-filled novel that will hold your attention throughout while you follow the investigation, the clues, and events in the various plot points. Be forewarned that the plot of The Cutting Place takes several dark, intense directions that heightens the tension, suspense, and anxiety while reading. The narrative is evenly paced and the new revelations and clues are evenly paced and gradually escalate until they reach critical mass on all the various plot threads. Casey does an excellent job with this complicated novel and the ending is satisfying.

Since this is the ninth book in the series, fans will know these characters and their development. Readers new to the series needn't worry about not being able to follow the narrative. I felt like The Cutting Place worked as a stand-alone novel. While you know these characters have a past and a history, enough information is given to understand their relationship and history. I had no problem following along and have not read all the books in the series.