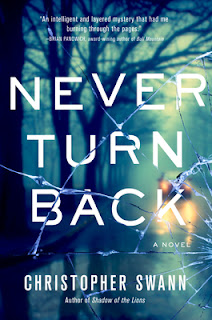 Never Turn Back by Christopher Swann is a very highly recommended psychological thriller set in Atlanta.

Ethan Faulkner currently is an English teacher in a private school. He and his sister, Susannah, survived a tragedy in their past. When Ethan was thirteen and Susannah was ten they were both shot and their parents were killed in a home invasion. The two went to live with their uncle, their mother's brother, a man they had never met. Now Ethan avoids close relationships and his troubled sister always seems to be on the move. When Susannah comes back to stay with Ethan, he is at the beginning of a new relationship with a woman, Marisa Devereaux. They had a one night stand at a conference, but now she is a co-worker.

The whole plot takes on a creepy Fatal Attraction vibe, after it becomes obvious that Marisa is preoccupied with him and his story. She is obsessed with him and his sister, she has researched their story online, but why? She is also beginning to overstep boundaries and acting inappropriately, but when Ethan breaks up with her, she becomes weird and frightening. She begins to sabotage Ethan's life. Soon Ethan is being questioned about Marisa's death, but there is a whole lot going on behind the surface that the police don't know. His Uncle Gavin might be able to help him, because his Uncle is known to be able to fix problems.

This is an absolutely compelling, riveting, page-turning thriller that was so engrossing I kept reading it straight through to the end. The story itself, as I mentioned is based on a Fatal Attraction theme, but there is a whole lot more depth in the finely nuanced plot. There is more than simply one narrative thread in the plot and the complexities and depth of the plot is engaging and entertaining. That and the quality of the writing places this thriller above the norm and is what kept me reading. Swann has crafted a well-written and intriguing novel in Never Turn Back.

The characters are perfectly drawn and well-developed. The bond between brother and sister is believable. The subtle development of Marisa's obsession and malevolence is palatable. Adding an uncle who fixes things was just icing on the cake for me. I really enjoyed this thriller and relished the wide variety of well-developed characters Swann portrayed with perfection.