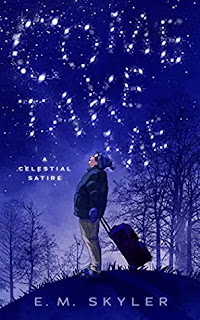 Come Take Me: A Celestial Satire by E. M. Skyler is a highly recommended comical science fiction parody that includes a few lessons for all of us.

Behind the scenes the crew that monitors several websites, including ComeTakeMe.com, Marshall M. Shmishkiss is a legend. They have nicknamed him the Shmish and eagerly watch every new video he posts to the site as he records his training in both mind and body for his quest to become the most appealing and prepared human available for an alien abduction. Shmishkiss is sure he is ready to face whatever he faces as a galactic explorer. He faithfully watches Star Trek. He even has the perfect site where he goes on designated nights to await his possible choice as an abductee. So when he discovers the humans behind the website, Shmishkiss reaches his breaking point and makes one final video, which results in what he wanted - or did it?

Shmishkiss is an incredible character and he will immediately capture your devotion. You will wish him well throughout the entire novel, especially after you learn his backstory. The supporting cast of characters are all either wonderfully quirky and out of the ordinary, or distinctively ill-boding and self serving - this includes aliens and humans.

This is a hilarious novel that is firmly entrenched in the absurd. Certainly it has the same humorous look at residents of the galaxy as The Hitchhiker’s Guide to the Galaxy series and Dr. Who and since Shmishkiss clearly reveres Star Trek, there are elements of that too. It doesn't mimic any of them, but you'll notice their influence in Come Take Me. This isn't a novel that is written to be taken too seriously, but there are some poignant, touching moments and several thoughtful observations that are in the narrative. At the end it is suggested that sometime in the future there may be another Shmishkiss novel. This was a fun bit of escapism wrapped up in a funny, enjoyable novel.

Disclosure: My review copy was courtesy of the publisher/author via Netgalley.
Posted by Lori L at 1:57 PM