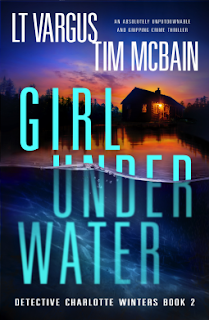 Girl Under Water by L.T. Vargus and Tim McBain is a highly recommended investigative whodunit.

After her wealthy father, Dutch Carmichael's death is determined to be murder, his daughter Gloria Carmichael, as the executor of the estate, hires Charlie Winters to investigate her father's death. She can't find a will and it appears that millions of dollars from the estate are missing, as well as some art work. Her four siblings, Brandon, Marjory, Jude, and Dara, aren't thrilled with someone looking into the family's secrets, but they appear to be cooperating as Charlie begins her investigation. Then Gloria calls because she has uncovered some information that she wants to discuss with Charlie immediately and is coming right over to her office. Gloria is killed in a hit and run right in front of Charlie's office and it seems that her death may be tied to her father's death. Charlie's determined to discover the truth, but this could put her life in danger.

The plot takes off at a good pace and it is interesting as Charlie meets all the Carmichael siblings. Obviously one of them is probably guilty, but it seems that all of them may be suspects, might have a motive, and likely have secrets. Charlie has to make her way through the misinformation and distracting sibling dynamics between all of them to try and piece together what likely happened. She also has to get creative to track down Dutch's long-time mistress/girlfriend and discover what she has to say. Once the novel introduces all the players, it starts to pick up speed, with twists and turns along the way and is un-put-downable.

Charlie is an interesting character, both intelligent and intuitive. Charlie also hears the voice of her murdered twin sister Allie in her head. (Allie was murdered twenty years ago.) Allie and Charlie keep up a running dialogue between them, although much of it consists of quips and sarcastic comments from Allie with Charlie replying. I need to say right from the start that I found Allie's voice to be intrusive and distracting, and for me it detracted from the actual investigation. I had to actually concentrate on setting her voice aside so it didn't keep diverting my attention from the actual plot. For me it would have worked better to make Allie an actual real sidekick helping with the investigation rather than a disembodied voice.