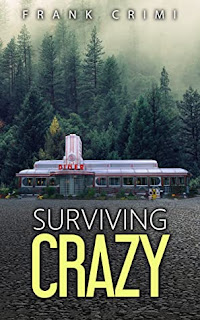 Riley Knight has been struggling with his employment options when he is offered the opportunity to be a major-league scout for the Arizona Prickly Heat baseball team. He is sent off to the town of Jericho, Idaho, to scout a rumored incredible player. In a roadside diner on the way to Jericho an apparent solar flare sends out an electromagnetic pulse (EMP) and all the electrical power goes out. This means phone lines are down, cars won't run, along with no power. What Riley discovers is that he is stuck at a remote diner with a bunch of crazy people. What he and the others don't know is that the road to Jericho, the city they are all hoping to get help from, is full of hazards and the city is filled with even more crazy people.

This novel is packed with quirky, unconventional, satirical characters and the dialogue is packed with one quip, joke, wisecrack, and diversion after another. The whole plot is one ludicrous, absurd, romp through a post-apocalyptic world full of people who didn't start out on the normal side of sane. This means their coping skills and survival instincts are also lacking. Basically the inmates are running the asylum and all of them are convinced they are reasonable people. Surviving Crazy follows the people stuck at the diner and people in Jericho. The comedy is non-stop, so much so it is almost overwhelming at times, and there are even a few twists thrown into the plot. In the end it actually showcases some veracity about the human condition.

Disclosure: My review copy was courtesy of the publisher/author via Netgalley.