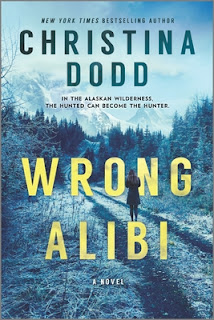 Wrong Alibi by Christina Dodd is a highly recommended novel of suspense.

Evelyn (Evie) Jones, eighteen, has accepted a job as a bookkeeper with Donald White in Rockin, Alaska. She is coming right out of a juvenile detention facility and is determine to make this job work for her sake and with hopes of maybe being reconnected with her mother and sister who now live in Rockin. She follows Donald White's instructions and his seemingly odd behavior right up until he disappears and leaves her to face charges of a double murder, theft, and embezzlement. Convicted, she faces life in prison when an accident miraculously results in her escape and fate allows her to start again. For ten years Evie has lived as Petie at Midnight Sun Fishing Camp, a remote wilderness camp. She eventually becomes the manager, but she has never given up on finding the man who called himself Donald White and making him pay for her conviction for his crimes and for her years of hiding. When she discovers he has returned to Alaska, she is ready to take him on.

There is no question that Wrong Alibi is a page-turner and will hold your complete attention right to the end. It's also true that many readers will be questioning some of the plot elements which require a suspension of disbelief along with enduring some rough transitions. There were a couple turning points in the narrative that really went a bit too far off track from the plot and actually detracted from it. But the action rolls along swiftly, either smooth or bumpy, and the twists along the way were interesting. I liked the novel quite a bit but I can't say it was one of the best written novels of suspense. The ending brought an element of surprise to the plot, although it was not entirely believable.

The characters while interesting were not fully fleshed out as individuals and several of them felt more like a "type" of character, or a caricature, rather than an actual human. Several characters never felt real for a moment. You know who is bad, who is good, who is dangerous, who is charming and the players never really stray from their assigned roles. Then again at time Petie/Evie was, truthfully, making quite stupid mistakes. But, even as I point out all these flaws in the writing and the plot, I did keep reading it and felt satisfied when I finished the novel. I guess sometimes you just need to read a novel for sheer escapism and Wrong Alibi will certainly satisfy that need.

Disclosure: My review copy was courtesy of Harlequin