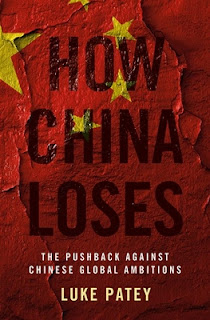 How China Loses: The Pushback against Chinese Global Ambitions by Luke Patey is a highly recommended scholarly, critical look at China's rising interests in advancing their influence and agenda around the world. Patey is a senior researcher at the Danish Institute for International studies.

Patey points out that his book shows that the political differences and security tensions between China and many countries around the world are still present, and in some cases larger than before. China is aggressively advancing its own agenda in the Belt and Road Initiative and with it's economic expansion into other countries. While China has plans for integration into the global economy, countries who have done business with them are increasingly becoming concerned that China's authoritarian politics and state-led capitalism predatory and creates vulnerabilities for their independence and place in the global economy. "As a globally engaged and economically powerful one-party state, China seeks to challenge the core values of the world’s liberal democracies: individual liberty, freedom of speech, and rule of law. This begins with buttressing the Communist Party’s international image and quelling critique of the Party and China at an international scale."

The rest of the world is noting the inequality among China's own population, their modern surveillance of their own people and others, and their ingrained economic corruption. The overwhelming large-scale pollution that occurs in China and around the world in relationship to their other projects is resulting in the noticeable and unacceptable contamination of the air, water, and soil. Other countries are wary of China’s predatory economic agenda, inability to compromise, and their military expansion. China carries into negotiations with other countries a sense of entitlement and assertion of their own agenda that is off-putting. They are also increasingly inserting themselves into the politics of other countries. The cost of doing business with China seems to be increasingly too high for other countries to tolerate. At this point the economic fallout from the COVID-19 pandemic in relationship to China is uncertain.

This economic examination moves beyond looking at the global economy through the perspective of only the U.S.A. and China to view the direction of the relationships through the viewpoint of other countries across the world. Patey visited countries in Africa, Latin America, and Europe, to study their relationship with China. He visits the South Sudan, in Eastern Africa, where some of China’s earliest and largest overseas oil investments have been threatened by political instability and civil war. Then he travels to Argentina in South America, where he studies the turmoil surrounding large-scale, multi billion-dollar Chinese infrastructure projects. Next he visits Western Europe, traveling to Germany, Denmark and Portugal. Finally, he goes to Japan, a major trading partner to China, but one with a long history of hostile relations. Patey also looks at China's relationship with other Asian countries and India.

How China Loses is a fascinating, scholarly and detailed analysis of China's rise and how other countries are responding to it.

Disclosure: My review copy was courtesy of Oxford University Press