The Last to See Her 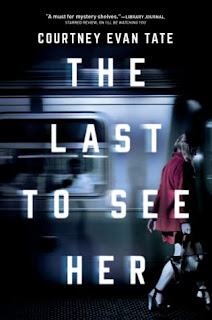 The Last to See Her by Courtney Evan Tate is a highly recommended psychological thriller.

Gen is a romance writer who is getting a divorce from her cheating husband. Meg, her sister who is a doctor has a convention in NYC and invites Gen along so the two can have a girls weekend and celebrate Gen's freedom. After a dinner together when they both drank way-too-much, they return to the hotel and Gen decides to throw her wedding ring off the balcony and then takes a walk to get some fresh air. This is the last time Meg sees Gen. She falls asleep and when Meg wakes up, she realizes that Gen never returned.  Meg finally gets the police to listen to her about Gen's disappearance, although naturally she is the main suspect.

After the opening, chapters alternate between the past as told through Gen's point-of-view, and the present day investigation via Meg's point-of-view. Meg is frantically searching for Gen and trying to discover what happened to her as she has been told to stay in the city, while Gen's chapters begin to show some secrets and behavior that no one knew about. Some of Gen's chapters give a brief glimpse into her current situation. The investigation uncovers secrets and both sisters have hid things from each other and others. There is a whole lot more going on than is immediately apparent and some twists change the plot.

Ultimately the sisters are well developed characters, but it does take the whole novel to reach that point. This makes them not quite as relatable or, eventually likeable. The twists, some of which are predictable, come fast and furious toward the end, which does make it a very compelling psychological thriller. You are going to want to get to the end to get the final picture of what happened as well as read what happened to all the characters. Your opinions about several of the characters will change drastically with additional information. The ending is a surprise. This is one of those novels that might now be totally believable, but the journey to get there is compelling and will hold your rapt attention.

Disclosure: My review copy was courtesy of MIRA Books
Posted by Lori L at 2:35 PM