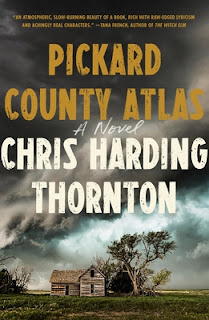 Pickard County Atlas by Chris Harding Thornton is a very highly recommended rural noir that focuses on past traumas amid the insular nature of a small town.

It is 1978 in a dusty town in the north central sandhills of Pickard County, Nebraska. Sheriff’s deputy Harley Jensen is on night patrol where he follows a routine as he cruises the area and checks on the empty farmsteads located throughout the county. He also keeps an eye out for Paul Reddick, a young man who always seems to be involved in trouble of one kind or another. In an attempt to bring some kind of closure after eighteen years, Dell Reddick Sr. has just made the decision to place a headstone over an empty grave for Dell Jr. who was killed in 1960 at the age of seven by a farmhand. Then the man committed suicide before he could tell people where he buried the boy and the body was never found. After this tragedy, the Reddick family has struggled. Virginia Reddick, Dell Jr.'s mother, withdrew into her own world and is said to be crazy. Rick Reddick is trying the best he can but his wife, Pam feels trapped and wants to escape from him, the constant struggle for money, and raising their three year old daughter.

Harley Jensen has a past trauma that other's in the county know well. In 1938 his mother committed suicide when he was young and the house where it happened is one of the abandoned farm houses on his regular patrol route. Harley is still traumatized by this, but can hide his emotions as a part of his job. The novel unfolds during six oppressively sweltering days and begins when Harley is on patrol and passes by his family's old house, he sees Paul Reddick's truck parked there and turns into the drive to see what trouble the youngest Reddick is up to now.

Pickard County Atlas is a wonderful example of rural noir and highlights the small town gossip and stories that can follow a family for generations. The slow start, while requiring some patience, eventually pays off and allows the tension to gradually build while the characters are introduced and their struggles with life are presented. As each new days unfolds, we become privy to the characters disclosing another incident, another misunderstanding, another enigma, another question, another deduction, another secret. As each new piece of information is added and builds upon the previous revelations, the novel becomes increasingly compelling, hopeless, and complex. The characters are well developed, and, although not especially likable, they are realistic as they head toward what seems a predestined fate. The quality of the writing and prose is excellent, making this an impressive debut novel.


Disclosure: My review copy was courtesy of Farrar, Straus and Giroux.
Posted by Lori L at 1:17 PM