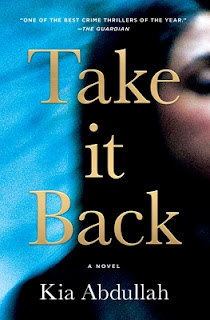 Take It Back by Kia Abdullah is a highly recommended, thought provoking courtroom drama.

Zara Kaleel gave up her career as a lawyer and now works as a victims advocate at a sexual assault center. Her legal background means she is astute and able to support and help victims beyond the ordinary. When Jodie Wolfe, a sixteen-year-old girl, comes into the center and accuses four boys of sexual assault, Zara is quick to assist her. However, this is no simple case. It is sure to be a hot topic and could cause an explosive situation in the community because Jodie was born with neurofibromatosis which results in facial deformities. She has been an outcast her whole life, even at home, while the boys accused are all English Muslims from East London. Zara herself is Muslim. In this one case issues of sex, race, class, and social justice collide and the media storm and outrage from both sides immediately begins.

Once the novel takes off it is hard to know who to believe or if any of the teens involved are telling the whole truth. Abdullah does an excellent job presenting the case on both sides and all of the characters are portrayed as individuals, with strengths and weaknesses. The story told by all parties on both sides differs and the trial needs to uncover the truth. Cultural differences come into play too and you will wonder if Zara's own prejudices are influencing her. The frenzy caused by the media is captured perfectly.

The chapters in the novel are narrated by multiple characters and cover events in the past as well as the current situation, helping to make all the characters well rounded individuals. The differences in cultural beliefs based on gender and snap judgments made by society clashed with Zara's beliefs and Jodie's background. Each new chapter added more information and made the case even more complex. It is a difficult novel to read, but it is well worth the effort.

I was firmly going to give Take It Back my highest rating until the end. I've been vacillating back and forth over it.  No spoilers here. I was shocked by the twist at the end, but I also thought that a good lawyer would have had many more questions rather than acceptance of last minute evidence and wanted to have it examined by a professional. And then the next twist left me feeling that the twists just didn't seem to fit in with the rest of an excellent novel in several different ways. It is definitely a novel worth reading and would make an excellent choice for book clubs.