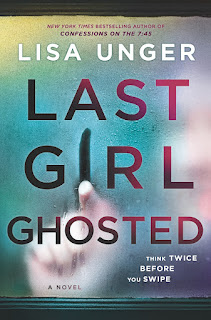 Last Girl Ghosted by Lisa Unger is a very highly recommended psychological thriller that begins with an online dating match.

Wren Greenwood, who writes the advice column "Dear Birdie," is talked into trying the dating app Torch by her best friend, Jax. She meets a few forgettable men but then she meets Adam Harper, an IT executive, and the two immediately have a connection. Three months later Adam doesn't show up for a date, deletes all of his contact information, and ghosts Wren. She has no idea why he would do this as she thought they were in a serious relationship. Then she learns that Adam may not be who he said he is and is contacted by Bailey Kirk, a private detective who is looking for Adam. Kirk is investigating the disappearance of three other women who also met Adam, although he was using different names, through Torch.

Wren's secret, disturbing background is hinted at in the beginning of the novel but more information is disclosed once Kirk enters the picture and the search for Adam becomes more intense. Chapters set in the present day are offset by chapters set in Wren's past when she was a child and are all written in the first-person. The chapters from her troubled childhood help establish who and why Wren is the woman she is today. There are many dark secrets in her past and several of them are unexpected. It becomes clear that Adam's ghosting of her is indicative of some future plans he may have, but he may not fully realize what strength Wren can pull from her past experiences.

Last Girl Ghosted is a totally engrossing well written novel. The evolution of how Wren handled the ghosting, beginning with blaming herself, and how this began to change when Kirk showed up was believable and riveting. As more information about Wren's background is disclosed, it becomes clear that there is more to her than the ability to give good advice to troubled people. She is an engaging character who has depth, resourcefulness, intelligence, and an inner strength. All the characters are fully realized and credible.

The plot is compelling and held my attention throughout. Just when you think you know all the facts, there is some new twist in the plot that adds another layer of depth and complexity. After thinking I had things figured out, it became clear that I didn't have the complete picture. Almost no one is who they appear to be. All the twists and new revelations, even when surprising, are conceivable in the plot. It was fantastic to see Wren pull all her inner resources and knowledge to the forefront to assist her. (It also serves as a warning about using online dating apps.) The setting is in late 2019 into early 2020, which also serves to add to the tension as readers know what is coming in the future.

Disclosure: My review copy was courtesy of Park Row Books