A Mother Would Know 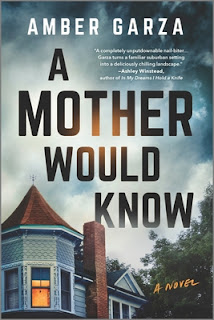 A Mother Would Know by Amber Garza is a highly recommended domestic psychological thriller.

Widow Valerie Jacobs is forgetting things and having trouble concentrating. She is sure she is exhibiting the signs of early-onset Alzheimer’s, just like her mother had. Her daughter Kendra is concerned about her being in her house alone. Circumstances work out that her son, Hudson, is able to move back home with her. While she is glad to have Hudson back home, he is not as helpful as she hoped and seems to spend more time out with his friends. There is also the neighbor who won't let anyone forget Hudson's past. When a woman is found murdered in the area, all manner of suspicions and accusations are leveled at Hudson with no evidence backing them.

Valerie is a complex character. Although she is the most sympathetic character in the novel, she is not entirely favorable or relatable. She loves her children, but lives with a lot of guilt over leaving most of the parenting to her husband when their children were young as she was away from home much of the time. She was the lead singer in a popular band and having an affair with a band member during this time so her focus was definitely on herself. As the narrator of the plot, it is clear that she remains self-centered, as are her children. Perhaps this is entirely natural considering her health concerns, but it is a facet of the plot that must be taken into consideration.

The plot moves along at a quick pace. Nothing is exactly as it seems and even the house may or may not be haunted. Along with Valerie's health concerns, the novel covers sibling rivalry, neighborhood gossip, regret over past mistakes, trust issues, and so many secrets. Suspend disbelief over several plot points and basically don't expect any great investigative powers from the police as it becomes very clear that they are written as incompetents. Read A Mother Would Know for the wild reveals and twists at the end that may or may not surprise readers but the journey there is fast and entertaining.

Disclosure: My review copy was courtesy of MIRA Books via Edelweiss.
Posted by Lori L at 1:59 PM