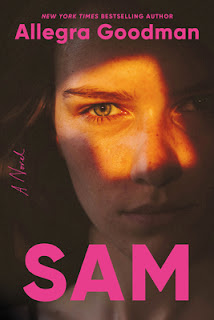 Sam by Allegra Goodman is a recommended coming-of-age story narrated by the protagonist from ages 7 to 19 years-old.

Sam is an active seven-year-old girl who lives with her mother, Courtney, and half-brother, Noah, in Beverley, Massachusetts. Courtney does her best but she has to work hard trying to make ends meet and doesn't have a lot of extra time or energy. Sam adores her father, Mitchell, but he can be an unreliable part of her life. What he does do right is introducing Sam to climbing, a sport she enjoys. Climbing is something she enjoys and continues doing as she grows up even as she struggles to fit in with others.

The novel is narrated by Sam in the third person present tense. At the beginning the sentences are very simple and child-like to resemble a seven year-old and then become increasingly more complex as Sam grows up. As a reader, this strategy wasn't entirely successful for me, especially at the opening of the novel. Later sections of the novel where she deals with what is a serious, actionable situation, her limited point-of-view is too narrow and restrictive.

Sam's love of climbing and her striving to excel at the sport does show her focus and determination to attain her goals despite her insecurities in other areas. All of the sections concerning climbing are descriptive and insightful. The narrative also competently describes her complicated life in a dysfunctional family. Her father struggles with addiction, something which she doesn't understand when young. Her mother has poor judgment in men; this doesn't just include Mitchell as Noah's father, Jack, is abusive. 3.5 rounded down.

Disclosure: My review copy was courtesy of Random House/Dial Press via NetGalley
Posted by Lori L at 9:00 PM