All the Dark Places

All the Dark Places by Terri Parlato
12/27/22; 320 pages
Kensington Publishing 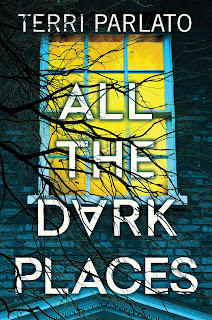 All the Dark Places by Terri Parlato is a highly recommended debut novel that is part procedural and part psychological thriller.

The morning after Jay and Molly Bradley have a group of close friends over to their home in Graybridge, Mass. for Jay's fortieth birthday party, Molly finds Jay murdered in his garage office. Jay was a beloved psychologist, so who would want to kill him - unless it had to do with the book he was writing on abnormal psychology and the criminal mind. Detective Rita Myers is sure that the murder was not random and that one of the guests from the party may be responsible for Jay's murder. This suspicion increases as the investigation unfolds. Guests at the party include Josh and Kim Pearson, Scott and Dr. Elise Westmore, and Cal and Laken Ferris.

Chapters are short and to the point as they alternate between the first person point-of-view of either Molly or Rita. This dual narration allows readers to experience both sides of the case. Molly is mourning, has numerous fears, and is still dealing with emotional turmoil from a childhood experience. Molly's backstory is heartbreaking and it is understandable why she is such an emotional mess.

In the alternate chapters, we learn more about Rita's background as she and her partner, Chase, actively investigate the murder and question the group of friends. Rita is an inherently likable character and it would be great to see her take on another case.

Molly is the more developed character while Rita isn't fully realized, which leaves room to develop Rita's character more completely in a future novel. All the various friends/suspects are also very lightly developed. Pay attention closely at the beginning to keep track of who is each character is what couples are married.

This is a good debut novel. The plot kept my attention, there were plenty of suspects to consider, and there are some twists to make things interesting. When another body is found at a vacation home where all the friends were also present, it adds additional questions for readers to scrutinize. How well you really know your friends? How much you share with your friends? The ending was a little unbelievable, but it did make for a page-turning ending.

Disclosure: My review copy was courtesy of Kensington Publishing.
Posted by Lori L at 2:11 PM