You Should Have Told Me 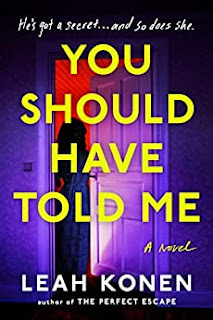 You Should Have Told Me by Leah Konen is a highly recommended novel of domestic suspense.

Janie and her partner Max have a newborn daughter, Freya. Janie is struggling with the responsibilities of having a newborn, including the constant nursing, lack of sleep, doubts about herself, and postpartum depression. Max has tried to support her and help with Freya, but one night, when he promised to take care of Freya and let Janie get some sleep, Max disappears. Janie wakes up to Freya screaming (crying) and can't find Max anywhere. Janie takes care of Freya's needs and then looks around the house for Max.

When she calls family and friends later no one has heard from him, but they don't seem too concerned. A mutual friend, Liana comes over to help Janie with Freya. However, when Janie learns from the police that a woman was murdered at a neighborhood bar and that Max was last seen there, she is determined to find out what happened. Janie begins to look into what happened that night.

The novel is set over several days and the chapters are opened with the time. This was an effective way to keep track of the time, which new mothers studiously have to do, and help increase the tension as the time Max is gone increases. I wouldn't say the novel is a thriller; it is more domestic suspense. Janie is concerned about Max's disappearance and is sure he is innocent of any nefarious activities. Max's family and friends feel the same way and are sure Max will be back soon. Janie's best friend is less sure.

The depiction of a new mother with a baby is realistic. Talking about nursing Freya, changing her, comforting her, is continuously mentioned in detail in the novel which some readers will understand and others will find annoying. You will need to suspend disbelief about some of Janie's actions and the idea that postpartum Janie could uncover information that the police wouldn't have already discovered. Max is really an unknown character without a lot of development as his appearance is so brief in the beginning of the novel.

The ending was more interesting and moved faster than the rest of the novel. I guessed most of what would happen but there were a few surprises. 3.5 rounded up.

Disclosure: My review copy was courtesy of Penguin via NetGalley.
Posted by Lori L at 12:27 PM