Blaze Me a Sun 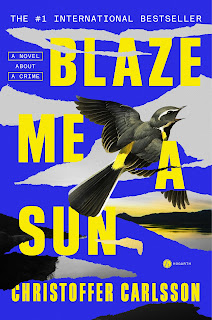 Blaze Me a Sun by Christoffer Carlsson is a very highly recommended Scandinavian crime noir/police procedural set in and around Halland, Sweden.

In 2019 Moth, a writer, returns to his hometown of Tofta where he plans to renovate the family home and write a novel about a series of murders from thirty years earlier and the police officer, Sven Jörgensson, haunted by them. He befriends former police officer Evy Carlén who was Sven's partner and assisted on the case. Moth also talks to Vidar Jörgensson, son of Sven, who went on to become a police officer too. Within the present day events, the story Moth is writing of what happened in 1986 is told.

On the same night in February, 1986, that the prime minister Olof Palme of Sweden is murdered, the Halland police receive a call from a man who has attacked his first victim and says he is going to do it again. Police officer Sven Jörgensson rushes to the scene and finds 20-year-old Stina Franzén in a car. He tries to save her but she subsequently dies from her wounds. Two more women are victims of the perpetrator dubbed the Tiarp Man. This unsolved serial killer case extracts a terrible price from Sven and he retires, dying in 1991.

The writing is absolutely excellent in this intelligent, engrossing crime novel written by Christoffer Carlsson and translated by Rachel Willson-Broyles. The plot unfolds slowly while follows a complicated trail of clues, information, secrets, and surprises across decades. This is not a procedural that follows any standard, expected pattern for a crime novel. It is a thoughtful, detailed oriented novel which follows a crime investigation, as well as the psychological scars and painful legacy left by the unsolved case of Tiarp Man across the community for decades. It also covers the emotional damage and trauma that can be a part of a family's legacy.

Narrative threads are told from the point-of-view of Moth, Sven, and Vidar. All of the characters are portrayed as realistic, empathetic, complicated individuals who are struggling in various ways to live their lives and deal with the knowledge they have or think they have as they pursue the various answers they seek. Life can be perplexing and messy, and Carlsson explores this admirably while developing his characters.

Disclosure: My review copy was courtesy of Hogarth via NetGalley.
Posted by Lori L at 5:59 PM